We were steaming up the River Marne on a nice sunny day. We had left Meaux and were planning to stop at La Ferté sous Jouarre. We had one more lock to do and then 10km to La Ferté, the lock was about 5 Km away. I suddenly heard a strange noise but we couldn't think what it could be. Margaret said "go and look at your dials". I went below and looked but things seemed in order except perhaps the battery voltage was a tad low. The cockpit had six boards forming the deck, each about 110 cm x 75 cm, and I lifted the one above the alternator, which was spinning happily, no broken belt, things seemed in order. I put the board back and we discussed the strange smell which was now with us - a sort of burning paxolin, hot electrics smell. Perhaps it was from an industrial site over the bank of the river? I went and studied "the dials". You could almost see the battery voltage dropping by the second. Things started to click in the brain. That "noise" was a starter motor engaging.

I lifted the deck board above the back of the engine and immediately thick black smoke poured out. I put my hand down and rived off the lead from the starter motor solonoid from its intermediate relay, which was mounted on a plate at the back of the engine. The engine was a Peugeot 2.5 L diesel, marinised by Vetus. As soon as I removed the lead, the noise stopped and the smoke abated. Phew! I said "Perhaps we should stop the engine". We looked at each other and simultaneously said "No!"

We got to the lock, tied up inside and kept the engine running. The young student lock-keeper asked us if we would be stopping just past the lock. I said that we would not as I needed somewhere with electricity as I envisaged a long stay and told him briefly what had happened. He couldn't be more helpful. He scoured the Yellow Pages and found a Peugeot dealer in La Ferté and wrote down the address and telephone number.

We pressed on to La Ferté, having briefly looked at a boat club but it was only for small motor boats with no sign of electricity. The jetty at La Ferté was quite small with a Belgian tied up right in the middle. He said for us to come alongside as he was leaving in the morning. We drank our G&Ts, had dinner, by which time the engine had cooled down and I set about removing the starter motor. It was all black inside and indeed a mess! I can only surmise that the intermediate relay had somehow made contact within itself and in turn actuated the solenoid and engaged the motor. Afterwards I removed the intermediate relay, doubled up the wire from the start key to the starter and we never had any further bother. We looked up the French for "starter motor" - démarreur. When talking to the lock-keeper I had said "start moteur" but he knew what I was talking about

After breakfast the next morning, at 9:00 am, Margaret rang the Peugeot Garage. She was having some difficulty, in spite of her A level French. I was going to cycle there but he insisted on coming out to us and at 9:30 a little white van arrived and Gary, in a suit and Harry, in overalls and with a big tool box, came down the gang plank to the jetty. I handed Gary the starter motor. Gary turned to Harry and said "Il est démonté". I said "Il est mort". He said he would be in touch before noon but he did not know the cost until he had examined it. At 11:30, yes, 11:30, Gary returned in his car, walked down the gangway, apologised that the paint on the new motor was still a bit wet and handed me our original end fitting now equipped with a brand new starter motor. He then took me in his car to his work place, about two miles away, where I paid the equivalent of about £130. He then brought me back to the boat, indicating on the way useful shops. The starter was back on before lunch at 2:00 pm and fully operational.

We just wanted to relax for the next two days and the day after that it was Bastille Day, when everything shuts, so we didn't depart until Saturday the 15th, overstaying the three day limit. It didn't matter as only one other boat came in and I made room for us both. 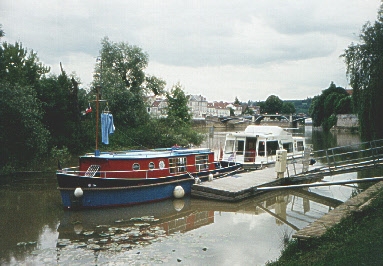 Can't you just imagine a Frenchman turning up at (say) Brighouse Basin, even with a BL engine with a duff starter motor and calling for help? There would be pursed lips and shaking of heads and, perhaps, three or four days later he might have a new motor. I just cannot praise "Gary" enough. Out of curiosity next time I went to the Peugeot dealer in Bradford for a new oil filter I asked how much a starter motor would cost. It was about £180 for supply alone!