We had already had one false start. The price of Brooklyn had been agreed and the purchaser ordered a survey. The survey confirmed the value but had close up photos of a bit of crumbling fancy stone work and the comment "Your stone mason will have to deal with this". All he said about the roof, which I thought the worse aspect was that there was a slight water ingress at the corner of one of the hips. But the killer concerned the storage heaters. We did not have "central" heating but de-centralised heating with fan blown storage heaters. Each room was separately programmed and each room had its own thermostat. The survey stated that the storage heaters probably contained asbestos and they would be a problem having them removed. They contained no asbestos - I know as I put them together. The insulation was rock wool. The purchaser pulled out.

We had by now found the perfect geriatric bungalow at Hibaldstow and I now had to inform the owner and the estate agent of the problem as Brooklyn was put back on the market. I decided I would also get the roof done and we ordered it to be done by a local roofer. Many of the nails holding on the blue slates had gone and many of the slates were "strapped". I also got a man to deal with a bulging boundary wall - another possible anti-selling point. The eventual purchaser actually looked round while scaffold was round three sides of the house!

We agreed a lower price than the previous and of course I was ten grand down also because of the renovations but we were still receiving more than we would have to pay. Things seemed to be going along, even if slowly, until it came to the day the entire "chain" was going to exchange contracts and pay deposits etc. and it ground to halt. We got more sense from our purchaser's estate agent than we got from own and apparently the solicitor of a Bradford lady had actually gone out to see her in order to extract a cheque!

We were all working to a completion date of Friday the 18th July. I fixed up with Pickfords, who said that because of all our stuff they would pack a lot on Thursday the 17th and finishing on the 18th. We went off to the boat but only went as far as the Brielsemeer so that we could rapidly return to England if necessary. We did return at the beginning of July after receiving a 'phone call that the people who were selling their house to the present owner of our prospective house would not move until the week following, i.e. the 25th July.

Once home I telephoned "Woody", the vendor of our prospective home, mayor elect of North Lincolnshire and asked him what the script was. He said that his chap wouldn't move because his wife was a nurse and was on nights on the 18th and that she couldn't alter and it would have to be the week after. I asked him if I may telephone him to which he agreed and gave me the number. Well! I had been appraised that he'd had a heart attack but soon after I started speaking to him and trying to get him to alter his intentions this fish-wife voice could be heard screaming "Let me talk to him". She was quite adamant that it was the 25th. I even threatened to begger off to my boat while they all sorted it out but she told me (screamed at me) to do what I liked and "Talk to your solicitor". With ashen face I told Margaret that I thought that I'd blown it, however I did talk to the solicitor, said that it would cost a lot to put all our stuff into storage for a week and would Woody drop the price by a grand. They agreed to £500, which was about what Pickford's were going to charge for a week.

I informed Pickfords that everything must go into store for a week. I told them that the move out was cast in tablets of stone on Friday the 18th but we wanted to move in on Friday the 25th. They couldn't do that but they could deliver some (including our bed) on Saturday the 26th and the balance on Monday. We agreed to this, relaxed and waited for Thursday the 17th.

They were expected at 9:15, 9:30 latest. It was 9:45. I telephoned. "We are coming tomorrow, you are moving out on Saturday the 19th". Aaaaaahhhh!!!!!! There was much argument, my insisting on talking to higher authority and eventually we had a promise that someone would arrive by 13:00 to start preliminary packing. A small van arrived and a bit of work was done. Friday dawned and at 9:00 two huge pantechnicons arrived with Pickfords mob-handed. They were gone by about 15:30. In the meantime the purchasers, who were doing a sort of DIY move with a small van asked if they could start stacking their stuff in the garage. There was a conversation with the solicitor, who agreed but "Don't give them the key". We exchanged mobile telephone numbers, BT having been instructed in both cases to cease normal service at 12:00 noon, we said that we would drop the keys at the solicitors. We, of course, had nowhere to live for a week so were going to go to our youngest son's in Warwickshire. We tried to 'phone the buyer at about 16:00 but there was no answer thus we set off, calling at the solicitor to deposit the keys.

There was a problem, we were informed as we arrived. The people buying our purchaser's house had not transferred the money, so we hadn't any money and everything was in limbo. Sacré Merde! The solicitor said this often happened and he was sure that it would all work out. We hadn't moved house for 38 years and nothing like this had happened to us before! He would telephone us at Peter's when things were OK. However, the purchasers of our house were distraught and would we let them have the keys to the garage so that they could take a few things back to their old house? Outside of which, by the way, was sitting another pantechnicon full of household belongings.

We set off South. Suddenly in Batley I remembered that I had cancelled all insurances on Brooklyn, as of 12:00 noon that day. Gulp! I telephoned the insurance company and after a lot of difficulty they agreed to re-instate the insurance. Thank Goodness.

We duly arrived at Peter's. We had brought a bottle of Champagne with us to drink as and when the money came through. Peter went down first. Then me and then Margaret and everyone else. Grandson Harry had brought some form of Montezuma's revenge home with him from his pre-school. It was not pleasant. On Monday morning we received the telephone call - the money was through, everything was in order. Tears - but we couldn't face the Champagne. We were getting near normal by Friday and thus departed and arrived at our new bungalow at 12:00 precisely. It looked as though moving out had only begun five minutes earlier. Woody had said they couldn't quite be done for noon and would it matter? Well, I said not, but I hadn't envisaged this. We saw Woody do his one contribution, carry out a table lamp and we saw a small flat back depart with potted plants. "May we put the car contents in the garage?". This was agreed and we went off to Tesco's in Brigg for lunch. Margaret was still delicate but I must have been about recovered as I had an "all day breakfast". We arrived back at our house at about 14:00. We had with us two folding chairs, a blow-up bed and the boat TV along with all my computer equipment with which I was not prepared to trust Pickfords. We set up the folding chairs in the conservatory and waited while Woody's family, including four of his seven daughters, worked very hard to empty our house. They were finished by about 18:00. It had been very noisy in the conservatory owing to the rain drumming on the roof. I think that day was the only really wet day of the long hot summer of 2003.

Once we had our house to ourselves we set about dinner. We had brought food, aperitifs and wine with us but then realised that we had no kettle and no corkscrew so we introduced ourselves to the neighbours across the way who came to our rescue. We spent the evening in my study watching the boat TV and then slept on the blow-up bed. It was the only room with any form of curtaining as it has a big French type window fitted with Roman blinds.

There followed much hard work fitting shelves, curtains and various other personal ideas but we soon had things basically as we wanted them. Over they years we have added and modified and are very satisfactorily ensconced here. When we think back on it - what if? What if there had not been the week’s delay and the money had not come through? Where would we have all gone? What ever would have happened? One shudders at the thought. One thing is certain though - I am never going to move again. 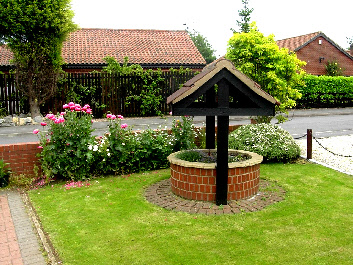 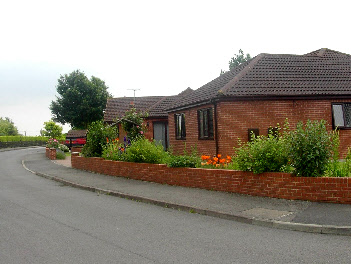 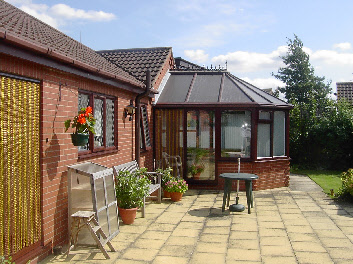